While other mountain towns and destinations attract top musicians and student-musicians as part of their summer festivals, Aspen Music Festival and School (AMFS) stands out as the nation’s premier summer music festival with both its outstanding young talent and its variety of abundant performances.

This summer, AMFS returns to a full slate of programming after the pandemic stalled in-person events in 2020 and slowed them down in 2021. But at least one good thing came out of the pandemic years: Everyone now auditions through video. Before COVID hit, AMFS held in-person auditions in eight cities throughout the country, so international students who couldn’t travel to an audition had to send in videos.

And that means more talent coming to Aspen. Videos poured in from “many, many thousands of applicants,” Fletcher said, making the selection of AMFS’s 480 students very challenging. “You get lots and lots of really excellent people. It’s one of the best groups I’ve ever seen. The performances we’ve had have been superlative.”

While musicians and performers continue to express gratitude for being back on stage nationwide, AMFS’ students are “very happy to be here and super, super motivated … with a great spirit of jumping in and being flexible,” he said.

Part of their enthusiasm stems from being able to perform onstage, but another portion comes from the high quality of private and group instruction, master classes, panels and lectures and the ability to rehearse and perform major orchestral repertoire alongside renowned teachers and principal players from major orchestras.

For many, like oboe player Donovan Bown, it’s their first summer with AMFS.

“Attending the AMFS has been a lofty goal of mine for as long as I can remember. The oboe faculty are the top of the top. Elaine Douvas is an absolute force of nature,” Bown said. “I’m also so excited to get to work with Titus Underwood. There aren’t many professional black oboists in this country, so to be able to work with him is a dream come true.”

Instructors that harpist Qi Han — who’s also here for the first time — will be working with rarely give lessons anywhere, which presents a unique opportunity.

“I’m also looking forward to performing with the orchestras; in school, harpists don’t have many opportunities beyond solo and chamber music performances, so the orchestral experience that I’ll gain in Aspen is important for my career,” Han said.

“I love his playing and his teaching philosophy,” Conley said. “Having the opportunity to learn from him and my peers in a larger tuba studio environment, coupled with the number of playing opportunities available to us, is the whole package.”

A score of live music

And, speaking of the whole package, AMFS really packs it in. Its typical eight-week summer season delivers about 200 classical music events, including concerts by four orchestras, solo and chamber music performances, fully staged opera productions and children’s programs, in addition to master classes, panels and lectures. The festival attracts approximately 100,000 people to soak in the magic of live music, which both artists and audiences deeply appreciate.

“Playing music gives you the sense of being part of a broader community; whether in the orchestra or conducting, you are working together to create something that is larger than yourself,” said Matthew Lynch, an Aspen Conducting Academy student. “When conducting, I must put my ego aside in service to the music, demanding excellence from not only the ensemble, but also from myself.”

That excellence comes out in not just AMFS’s conducting academy, but also its many other programs of study, including (get ready — it’s a whopping list): orchestra, solo piano, collaborative piano, Aspen Opera Theater and VocalARTS, Seraphic Fire Professional Choral Institute, the Susan and Ford Schumann Center for Composition Studies, the Aspen Contemporary Ensemble, American Brass Quintet Seminar @Aspen and the classical guitar program.

“This is the first summer we’ll be seeing their whole vision for the program,” Fletcher said, adding that it was planned to launch in 2020, and last year, it only accepted 15 students, compared to this year’s 43.

One highlight of the program comes in the form of Verdi’s “Falstaff” on July 22. It features world-renowned Welsh bass-baritone Bryn Terfel, who truly inhabits the titular role of Verdi’s comedy through three acts staged for the Benedict Music Tent. The story depicts the misadventures of Sir John Falstaff, a portly knight who attempts to seduce two married women for their fortunes.

“(Terfel is) arguably the greatest vocalist,” Fletcher said. “He sings this role at The Met and everywhere in the world.”

Aspen Opera Theater and VocalARTS’ other big performance, Mozart’s “Don Giovanni,” comes to the Benedict Music Tent Aug. 18. Based on the legend of Don Juan, the comedic and moral tale tells the story of an irresistible, yet irredeemable, playboy whose escapades lead him to destruction.

Audiences can catch opera’s emerging talents being coached on opera scenes at 10 a.m. every Saturday at the Wheeler Opera House, through Aug. 20. The young artists also perform polished works during free events at 5 p.m. at the Wheeler July 14 and 28 and Aug. 11.

• The Aspen Conducting Academy, which provides intensive conducting training so conductors can gain podium experience under masters through a wide range of repertoire, performs at 4 p.m. Mondays.

All shows take place in the Benedict Music Tent.

“The Conducting Academy is one of our signature programs. It’s unique in the world,” Fletcher said, pointing out how conductors work with a full orchestra every day, as opposed to other prominent programs in the nation, which only offer a string quartet to conduct. “We have an amazing record of success with our alumni. Those concerts are popular. You get to see these (conductors) grow through the summer. Any orchestra searching for a young conductor generally comes in August to see some of the top talent.”

The Susan and Ford Schumann Center for Compositional Studies is another stellar AMFS program, which features nine young composers. In fact, Philip Glass was an alumni.

“It’s a great incubator for amazing composers,” Fletcher said. “We not only have a brilliant regular faculty, but then, all through the summer, we’ll be hosting guest composers.”

Its “A Mozart Evening with Arie Vardi, conductor,” at 7:30 p.m. July 23, features concertos for one, two and three pianos. It showcases not only legendary piano pedagogue Vardi, but also a hand-picked cadre of his star students.

For the most up-to-date concerts schedules, pick up a tear sheet around town.

“I can safely say that this is the most important such ensemble working today,” Fletcher said, adding that brass has had a presence at the festival for 40 years, but AMFS launched a dedicated program for it a couple years ago. “These quintets are just doing chamber music with very intense coaching from their mentors (led by American Brass Quintet members, faculty of the AMFS since 1970 and The Juilliard School since 1987).”

One highlight of AMFS’s season features Isbin and renowned sarod player Amjad Ali Khan in a recital at 7:30 p.m. on Aug. 6

“Sharon’s concert is typically one of our most popular concerts,” Fletcher said. “It’s a mix of her Western classical technique with Northern Indian techniques, which are completely different. It’s just a really interesting cultural exchange.”

The Aspen Contemporary Ensemble collaborates with the composition studies program, in addition to performing music by prominent living composers and 20th century classics. Because the program is so rigorous, students are not permitted to engage in extracurricular musical pursuits, such as concerto competitions.

“The seven students devote themselves to all new music. It’s very challenging,” Fletcher said. “Student-composers write pieces for the ensemble, which is a lot of extra learning in a very intense, sustained way.”

The ensemble usually performs every Saturday, alongside AMFS artist-faculty, at 4:30 p.m. at Harris Hall, in addition to other projects.

“They also join us for a spectacular ending to our season on Aug. 21,” Fletcher said. “This final Sunday performance of the Aspen Festival Orchestra features the Berlioz Requiem, which is one of our largest pieces, with two choirs, triple the amount of brass in a ring all around the tent for surround-sound, and soloists.” 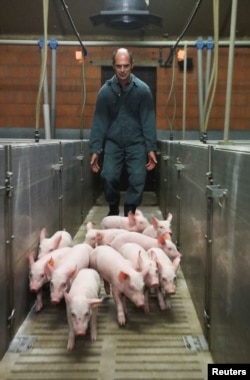 Do Pigs Like Tunes? Belgian Scientists Want to Know

5 Music-Dependent Tv Demonstrates to View in 2022